At the end of a string of theoretical stories about women who may or may not have been with other men, the Mishnah brings a terrible story that actually happened:

“MISHNA: Rabbi Yosei said: There was an incident involving a young girl who descended to fill her jug with water from the spring, and she was raped, [and the identity of the rapist was unknown.] Rabbi Yoḥanan ben Nuri said: If the majority of the people of the city marry their daughters to members of the priesthood, this young girl may be married to a member of the priesthood.” (Ketubot 14b)

The halachic question the Mishnah is addressing is what is the possibility that the girl was raped by a mamzer or a slave, which would render her incapable of marrying a Cohen. When the story is expanded upon in the Gemara, we find out that the incident happened in Zippori, specifically in the קרונות של ציפורי, the wagons of Zippori (Ketubot 15a) The Gemara understands this to mean that it happened on a market day, the day that wagons and caravans came into the town. This would perhaps impact on the identity of the rapist, maybe he was a foreigner who came to town for the market.

However, the parallel text in the Yerushalmi says that the incident happened in קרונה של ציפורין, the “krona” or spring of Zippori. We hear about this spring in a different story in the tractate of Megillah:

In relating some unusual things that Rabbi Judah the Prince did, the Gemara tells us that he bathed on the 17th of Tammuz (a fast day) in the krona of Zippori. The logical explanation is that krona shel Zippori is a spring, although Rashi explains it here as wagons as well – Rebbe wanted to do a public act so he bathed on market day when many people would see him.

Whether krona is a spring (as fits with both stories and with the Greek word krene) or a market, the story itself accords with what we know of Zippori. It was a city with abundant water sources nearby as well as a busy market which catered to a very diverse population. The spring mentioned here may be Ein Zippori, located at the entrance to the modern moshav: 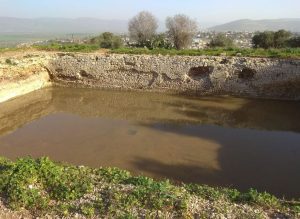 Is this Zippori’s spring? (Aliza Avshalom)

Where is Zippori and what was its significance? Zippori was a town in the lower Galilee, about halfway between two other important towns, Bet Shearim and Tiberias. Although it started out as a small Jewish town in Hasmonean times, it grew to be a large and cosmopolitan city by Roman and Byzantine times. For a period of time, it was the residence of Rabbi Judah the Prince and the home of the Sanhedrin.

Zippori was a thriving city for many centuries and even after its decline, the Arab residents retained a variation of its name, Safuriya. Safuriya was conquered by Israel in 1948 and became a farming village. About forty years ago excavations began on the ancient site adjacent to the moshav. These excavations uncovered an incredibly rich and beautiful city. It held evidence of Jewish, pagan and Christian populations. The archaeologists uncovered a theater, as well as a richly decorated home with mosaics. The marketplace was also found, with well-worn streets and fabulous, very pagan mosaics. And a synagogue, with its own stunning mosaics, was also discovered. 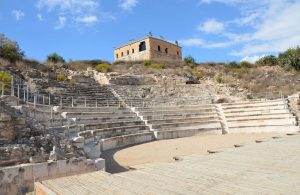 The excavations show us a city that evolved from being wholly Jewish, with many of the older homes boasting mikvaot, to a much more mixed city. The mansion, from the 3rd century CE, is adorned with a detailed mosaic of the festival of Dionysus, as well as a portrait of a beautiful woman, known as the Mona Lisa of the Galilee. The market has a building dedicated to the measuring of the Nile, with pagan imagery. These seem to indicate a Roman, Hellenized population. On the other hand, the synagogue (only one was found although the Gemara says that there were eighteen in the city) shows images from the Temple alongside the signs of the zodiac. 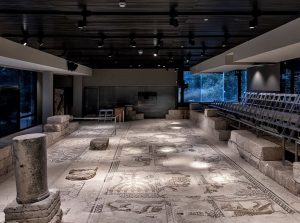 The market of Zippori is mentioned in many places in Rabbinic literature as a bustling place with many types of visitors. Zippori’s market was a place where one could expect to see Sages discussing Torah, Roman officials imposing fines and even encounter “minim,” heretics of the Jewish Christian variety, as this story about Rabbi Eliezer ben Hyrcanus shows:

“Rabbi Eliezer ben Hyrcanus remembered that he was walking on the main street of Zippori and Jacob of Kfar Sachnaya [a well-known Jewish Christian] came and told him some Torah and it pleased him” (Kohelet Rabba 1:8) 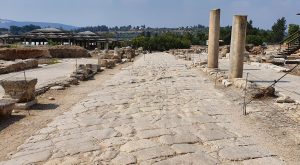 Zippori was the home of many important rabbis. Rebbe (Rabbi Judah the Prince) moved here from Bet Shearim because the air was better and he was a sickly man. But before him, the rabbi of the town was Rabbi Halafta and then his son, Rabbi Yossi ben Halafta. When the Mishnah cites Rabbi Yossi, it is Rabbi Yossi ben Halafta of Zippori. Our Mishnah is bringing an eyewitness account of something that happened in Zippori, told by the mara d’atra, the rabbinic leader of the city, Rabbi Yossi.

While the Gemara is concerned with the halachic ramifications of the story of the rape, we are understandably disturbed by the fact that such a thing happened in a large and important town, with strong rabbinic authority. But it seems that Zippori, while large and impressive, was not the safest place. This same Rabbi Yossi instituted some rules meant to protect the women of Zippori from attackers:

Rashi explains that the incident alluded to here is that the son was kidnapped and when the mother came to find him, she was lured into a secluded place and raped. The second ordinance concerns a woman going to use the bathroom outside the town, where she will also be in danger, so Rabbi Yossi had women go together and talk, so that a man would see that she was not alone and would not be tempted to attack her.

Rabbi Yossi seems to have been aware that his town had some undesirable elements. While Zippori may have been a place of Torah, its varied population, and maybe the people attracted by its large marketplace, held dangers for women, dangers that our Mishnah attests to. Rabbi Yossi tried to mitigate them but could not get rid of them completely.