We Built This City

Sometimes the daf has impeccable timing. This week, as we begin the days of mourning that start with Rosh Chodesh Av and culminate in the saddest day of the year, Tisha B’Av, our daf connects to these stories. On 138a we have a brief mention of an עיר של זהב, a city of gold and whether it is permitted for a woman to go out wearing one on Shabbat. In order to define this city of gold  we need to go back to Shabbat 59a:

And neither may a woman go out on Shabbat to the public domain with a city of gold. What is the meaning of: With a city of gold? Rabba bar bar Ḥana said that Rabbi Yoḥanan said: Jerusalem of Gold, a gold tiara engraved with a depiction of the city of Jerusalem, like the one that Rabbi Akiva made for his wife. (Shabbat 59b)

It seems that there was a very fancy piece of jewelry known as a city of gold and it was the skyline of the city, crafted into a tiara. This was a jewel that was known in many places in the ancient world and not only in Israel. We can see one on the goddess Tyche here in a mosaic in Bet Shean:

In ancient Judea, the city was of course Jerusalem and not only did a few lucky wealthy women have one, but sometimes brides would wear them on their wedding day. And what is this nice story about the generous Rabbi Akiva?

Rabbi Akiva became betrothed to the daughter of bar Kalba Savua. When bar Kalba Savua heard about their betrothal, he took a vow prohibiting her from eating all of his property. Despite this, she went ahead and married Rabbi Akiva. In the winter they would sleep in a storehouse of straw, and Rabbi Akiva would gather strands of straw from her hair. He said to her: If I had the means I would place on your head a Jerusalem of Gold, a type of crown. (Nedarim 50a)

We all know about Rachel who pushed the illiterate shepherd Akiva to go study and was disinherited by her wealthy father. What is less well known is that eventually Akiva became not only one of the greatest rabbis of all time but also very rich. He made good on his romantic promise and bought his wife the very expensive Jerusalem of Gold. Rabban Gamliel’s wife was jealous and wanted one too but Rabbi Akiva explained that Rachel was a special case, he owed everything to her.

But what does this all have to do with Tisha B’Av? As a result of the tragedies of the Great Revolt and the loss of the Temple, the Sages instituted certain mourning customs. In the very beginning, there was spontaneous mourning, so much that Rabbi Yehoshua spoke to the people and told them not to go overboard in their sorrow because such excessive mourning was not sustainable. Rather, they need to institute customs that everyone can follow: not painting part of your house, limiting your celebrations. Rabbi Yehoshua’s wisdom is seen in the fact that these customs are still followed today.

When the Temple was destroyed a second time, there was an increase in the number of ascetics among the Jews, whose practice was to not eat meat and to not drink wine. Rabbi Yehoshua joined them to discuss their practice. He said to them: My children, for what reason do you not eat meat and do you not drink wine? They said to him: Shall we eat meat, from which offerings are sacrificed upon the altar, and now the altar has ceased to exist? Shall we drink wine, which is poured as a libation upon the altar, and now the altar has ceased to exist?. . . Rabbi Yehoshua said to them: My children, come, and I will tell you how we should act. To not mourn at all is impossible, as the decree was already issued and the Temple has been destroyed. But to mourn excessively as you are doing is also impossible, as the Sages do not issue a decree upon the public unless a majority of the public is able to abide by it… Rather, this is what the Sages said: A person may plaster his house with plaster, but he must leave over a small amount in it without plaster to remember the destruction of the Temple. Rabbi Yehoshua continues: The Sages said that a person may prepare all that he needs for a meal, but he must leave out a small item to remember the destruction of the Temple. . .  The baraita continues: And anyone who mourns for the destruction of Jerusalem will merit and see its joy. (Bava Batra 60b) 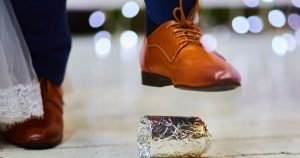 However, as time passed it became easier to forget. So the rabbis instituted other customs. In Gemara Sotah we hear about restrictions on the finery of grooms and brides at weddings:

To wear a skyline of Jerusalem when it was now a pagan city called Aelia Capitolina and the Temple Mount had foxes entering the ruins was a mockery of the holiness of the city. It was not conceivable to the Sages that such a thing could be acceptable. So the Jerusalem of Gold was forgotten although Jerusalem was not. In the 1960s Naomi Shemer came along and reminded us all of this beautiful custom.

And what of today when Jerusalem is part of the sovereign state of Israel? Although we are still far from a messianic state, we are in a much better place than in the days of the Gemara. Can a bride wear a Jerusalem of Gold today? There are jewelers making them, perhaps that is a sign of the redemption.