Can a woman have it all? Is a career woman a good wife and vice versa? Are we in first, second or third wave feminism?

These questions, which seem very 20th and 21st century, can actually be applied to our Mishna and Gemara. Here we have a list of tasks that a woman must do in order to be considered a good wife:

“And these are tasks that a wife must perform for her husband: She grinds wheat into flour, bakes, and washes clothes, cooks, and nurses her child, makes her husband’s bed, and spins wool” (Ketubot 59b)

You can get tired just reading the list, and of course this does not include the million and one “small” things like cleaning, shopping and childcare. But do not despair, hope is on the way, in the form of the continuation of the Mishnah: 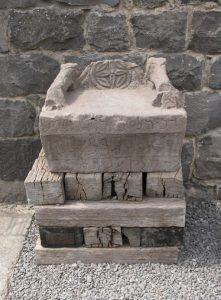 A Katedra in the Korazim synagogue (Wikipedia)

Like so many things in life, the wife’s duties can change depending on how wealthy her family is. In fact, when Maimonides lists a woman’s obligations to her husband, he specifically adds that most of these are ONLY if the couple are poor:

“There are other tasks that a woman performs for her husband when they are poor; they are: to bake bread in an oven . . She should cook food, wash clothes, nurse her child, place straw before her husband’s beast – but not before his cattle – and grind [flour].” (Mishneh Torah Hilchot Ishut 21:5)

High economic status can significantly lighten a woman’s burden, although not get rid of it completely, as we shall see. But before we delve into what tasks a woman still has to do even when she is wealthy, let us understand what are these basic jobs and how are they ranked. What can she give up at each stage and why?

The Mishnah lists basic duties that have to do with the proper functioning of the household. Grinding wheat (or bringing it to the mill, the Gemara argues for each), baking bread and cooking are so she can feed her family. Laundry and nursing her child are also vital parts of a working household. The two that seem to be outliers are making the bed (actually setting up the bed) and spinning wool. We will return to those soon. The hierarchy of tasks can be seen in two ways. The wife first gives up those labors that are physically demanding: laundry, milling wheat and baking. These are time consuming and difficult. With the arrival of another servant she hands over two less demanding but still significant jobs: cooking and nursing her child (this one is probably the most difficult for modern people to imagine, I would liken it to handing over childcare responsibilities today). Finally, the easiest task – making up the bed – is given over with the arrival of another servant. 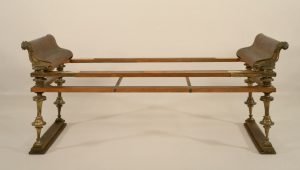 A bed in Roman times (Wikipedia)

But we can also look at this list as moving from jobs that are outside the house and/or less intimate to jobs that are very close to the house and its inhabitants. If for laundry and baking the wife is outside and not connected to the house, cooking and nursing are already much more personal and take place inside the home. The final level, making up the bed, reaches into the bedroom and touches on the couple’s physical intimacy.

So according to Maimonides, and with the hope that women will have resources to hire help, what obligations does a good wife have? Maimonides follows Rabbi Eliezer and says that even a wealthy woman has to keep busy with spinning. Why spinning? Clearly there is monetary value involved; this is work that a woman can do at home and still bring in some income. But there seems to be more going on here. Spinning is the classic “woman’s work.” The Bible talks about all the wise women who spin (Shmot  35:25) while the Gemara, less complementarily,  states that a woman has no wisdom except in her spinning (Yoma 66b). Women are crafty in that they are always “spinning and talking,” i.e., planning some complicated plot (Megillah 14b).. And even in English, an unmarried woman is a spinster. It is proper for a woman to occupy her time with spinning, and according to Rabbi Eliezer, it will keep her out of trouble. Suffice it to say that neither Rabbi Eliezer or Maimonides could envision a reality where a woman really could sit in a katedra, the modern Hebrew word for adult education. 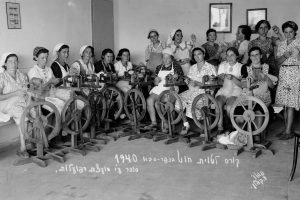 There are some tasks that a woman cannot hand off to others. The jobs that bring in money or that make the house function can be done by others if a woman is wealthy enough. But there are certain more personal obligations that a woman must do for her husband:

“Rav Yitzḥak bar Ḥananya said that Rav Huna said: Although they said that she may sit in a chair she should still pour his cup; and make his bed; and wash his face, hands, and feet,” (Ketubot 61a)

Rashi points out that these are not obligations but rather the rabbis are giving a wife good advice: these are acts that will endear a wife to her husband and they should not be “outsourced.” Rashi predates by about one thousand years the famous “languages of love” popularized in a book by Gary Chapman. There he speaks about how for some people what creates and shows love is “acts of service,” doing things that help make your partner’s day easier and more pleasant. That seems to be the idea here, showing love and affection rather than being just another maidservant.

Can a woman have it all? They were already asking that two thousand years ago. 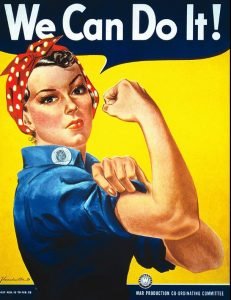