What if all the fasts and prayers we have been discussing until now do not work? In the beginning of our tractate we learned from Rabbi Yochanan that there are three keys that are only in God’s hands, and not in human ones: birth, rain and resurrection (Taanit 2a). But what if a person could intercede with God directly and bring the rain? That is the story of Honi HaMaagel in the third chapter of the Mishnah:

“An incident occurred in which the people said to Ḥoni HaMe’aggel: Pray that rain should fall. He said to them: Go out and bring in the ovens used to roast the Paschal lambs, so that they will not dissolve. He prayed, and no rain fell at all. What did he do? He drew a circle and stood inside it and said before God: Master of the Universe, Your children have turned their faces toward me, as I am like a member of Your household. Therefore, I take an oath by Your great name that I will not move from here until You have mercy upon Your children” (Taanit 19a)

Shimon ben Shetach a well-known rabbinic personality, appears in the continuation of the story, expressing displeasure with Honi’s actions. This allows us to date the incident. The time is late Second Temple period, first century BCE. The Temple is standing, the Hasmonean kings are ruling and we are still in the time period of the zugot, the rabbinic pairs who predate the Tannaim, the rabbis of the Mishnah. So we are at an early stage in rabbinic history.

Can we learn anything about Honi from his name? It is significant that he is never referred to by the title Rabbi. According to Zeev Safrai, Honi was part of a group of “Hasidim,” men of extreme piety who were often unconventional. More on that later. His “last” name, HaMe’aggel, literally means the circle maker. The simplest explanation is that it is a nickname, based on this incident. But others have explained it differently. In Sefer Yochasin, a book from the time of the Geonim, a tradition is recorded in the name of Rabbi Tzemach Gaon, that Honi comes from a town called Maglo, and this is a just a way of identifying him – Honi the Magloite. Later the name took on an additional meaning because of what he does with the circle. This is similar to Nahum Ish Gamzo, also appearing in our tractate. He is from a place called Gimzo but he was known as always saying “gam zo letova,” this too is for the best, so his name was a double entendre.

There is a third way of understanding Honi’s name. Houses in ancient times had flat roofs that had to be plastered every winter. The job of plastering was done with a tool called a מעגלה, a roller. Here is a reconstruction of one: 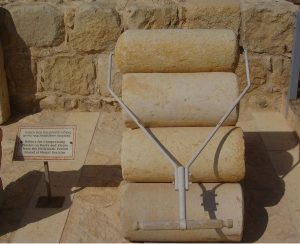 This was Honi’s profession and so he got the name HaMe’aggel – the guy who works with the roller.

The story itself has different dates connected to it. In the Mishnaic version it seems to be taking place very close to Pesach, since the ovens to roast the Passover sacrifice are already out in the courtyards. But in the version presented later in the Gemara (23a) it is at the end of the month of Adar and in Megillat Taanit (a list of days in which fasting is forbidden by the rabbis) it happens on the 20th of Adar. In any case, this is at the end of the winter, and presumably all the fast days that the rabbis have prescribed have been unsuccessful. The people turn to Honi, who has a reputation as a miracle worker, and indeed he brings the rain. Shimon ben Shetach is not happy with this intervention. According to Rabbi Benny Lau, he sees it as undermining the work of the rabbis, who emphasize that serving God is not through shortcuts and miracles, but through study, prayer and fasts. However, perhaps sometime only a miracle worker can get results.

A fascinating detail of the story has recently come to light in archaeological excavations in Jerusalem. The rain is falling so heavily that the people are afraid of a flood.

“They came and said to him: Just as you prayed over the rains that they should fall, so too, pray that they should stop. He said to them: Go out and see if the Claimants’ Stone, has been washed away.” (Taanit 19a)

What is this Claimants’ Stone, אבן הטוען or perhaps הטועין? Rashi refers us to the Gemara in Bava Metzia about lost objects, which explains the meaning of this term:

The word could be טועין toin, meaning lost, or it could be טוען toen, meaning calling out, either explanation would work. Somewhere in Jerusalem, presumably on a well-traveled street, was a Lost and Found center. But until very recently this place was unidentified. In the last decade there has been a large excavation of a road in the City of David. This major thoroughfare went from the Shiloach Pool at the bottom of the city, all the way up to the street running along the Western Wall of the Temple Mount. It was the most important street in Second Temple Jerusalem; broad, with steps to make it easier to climb the hill, and stores lining the sides. It gained the name the Pilgrims’ Road since the olei regel, the pilgrims to the Temple, would walk on it.

A few years ago, a strange thing was discovered on this street – a platform that does not lead into a store but rather stands alone.  It seems not to be the entrance to a building as no doorway was found nearby.  Joe Uziel and Nachson Szanton, the archaeologists who discovered the stone, suggest several possibilities for the podium’s use. Perhaps it was a place for speeches, a Hyde Park for Jerusalem; or for government sponsored announcements. Perhaps auctions, maybe even of slaves, were held there. Or perhaps this was the Claimants’ Stone!

What makes this podium a possible candidate to be the אבן הטוען ? It is on the main street, high up so that everyone would see the speaker, and in a position where many can see and hear him all up and down the street. Could it be that Uziel and Szanton have found something that had been lost:  a small and fascinating detail about aliya laregel, pilgrimage to the Temple?

The platform on the Pilgrims’ Road (Chana Koren)

Honi’s story ends tragically. He sleeps for seventy years and when he wakes up no one knows who he is. The loneliness is unbearable and he prays to die. Another version of his death is presented in Josephus’ book Antiquities of the Jews. There his miracle working powers are being pressed into service by one side in the Hasmonean civil war between two brothers. He refuses to curse one side and instead prays for peace from both sides. This enrages the fighters and they kill him. In both stories, Honi’s miraculous powers do not seem to end well. Josephus’ story show us how evil people could pervert Honi’s connection to God and use it for their own purposes. In the Gemara’s version, his wondrous abilities are meaningless in a world where no one believes his story. Rabbi Lau interprets the seventy years story as a lesson – Honi has to see that there are no shortcuts to serving God. Just as the man planting the carob tree knows that he is part of a human chain, a process that will take time to come to fruition, Honi needs to understand that sometimes things cannot be accomplished instantly through miracles but need time and work to blossom.

Honi’s grave is outside the northern town of Hatzor HaGelilit. His yahrzeit is marked on an auspicious day – the fifth of Iyar, the day Israel was proclaimed a state. Perhaps this is another piece of the Honi story – the state of Israel was a long and arduous time in the making but a miracle nonetheless . 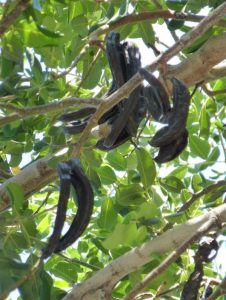