Living on the Edge

The Mishnah on daf 35 lists the five acceptable grains that can be used to make matza. We have discussed these previously (see The Staff of Life) and the point of these five is that they have gluten and rise. Ironically, in order to fulfill the commandment of matza, unleavened bread, it has to be made out of materials that will leaven.

Let’s take a look at one of the grains, barley, and especially where it is cultivated. 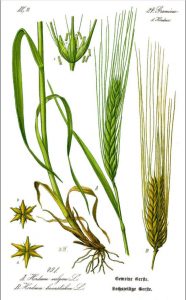 The king of grains was wheat, and the king of wheat was solet, semolina, finely ground flour. Barley, although it ripens first of the seven species, and was brought as the first sacrifice of new grain (the omer on Pesach) has a much lower status. It was coarser and had less gluten so it did not produce a nicely risen loaf. Unlike in Egypt, where they used it to make bread as well as beer, in the Land of Israel barley was mostly thought of as animal food. Karaites use barley to make their matza because they consider it to be true לחם עוני, poor man’s food. When the Mishnah talks about what is acceptable for a man to pay as alimony, wheat is the standard, and if you must give barley, you need to give twice as much:

“If a man provides for his wife through an agent, he must give her [every week] not less than two kavs of wheat or four kavs of barley.” (Ketubot 5:8)

Barley however does have one advantage – it is a hardier crop and can grow in more difficult conditions, with less water. And in fact, the Mishnah continues and states that only one specific Sage permits barley as alimony:

“Rabbi Yose said: only Rabbi Ishmael, who lived near Edom, granted her a supply of barley.”

Edom in Biblical times was on the eastern side of the Jordan. After the First Temple was destroyed, the Edomites moved into the southern and eastern parts of the Land of Israel. What is special about this area and why is barley more highly regarded there? 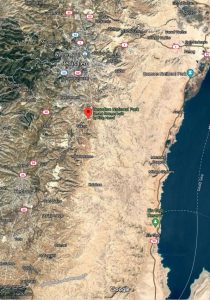 The eastern part of the Judean Hills borders on the Judean Desert. This area has a special name in Hebrew and special conditions. It is called ספר המדבר, the edge of the desert, or the frontier. It isn’t quite desert but it is not quite settled land either. The frontier has a unique climate: it has some rainfall but less than what would fall to the west. Days are hot but nights are cold, like in the desert. And there is a sharp drop off the east, to the area of the Dead Sea. Locations on the frontier include (from north to south) Anatot in Benjamin, Tekoa and Sussia in Judah. This area is not great for agriculture but it is ideal for goats and sheep. They need grazing land and the rainfall here is enough for some grass to grow to feed animals but not always enough for human food.

Many of the prophets were shepherds by occupation and therefore they spent time here on the frontier of the desert. Jeremiah was from Anatot and Amos was from Tekoa. Both are aware of the difference between the frontier and the wetter area to the west. Amos takes the metaphor of rain as reward to new heights when he describes a scene he must have witnessed often in Tekoa:

“I therefore withheld the rain from you three months before harvest time: I would make it rain on one town and not on another; One field would be rained upon while another on which it did not rain would wither. So two or three towns would wander to a single town to drink water.” (Amos 4:7-8)

Standing at the mountain fortress of Herodion, above Tekoa, on a winter’s day, it is common to see rain in Jerusalem and sun over the desert. Amos took this image and turned it into a metaphor for God’s rewarding one place and punishing another.

Because of this unsteady and low rainfall, any crops grown here have to be hardy. That is where barley comes in. It requires less rainfall and can survive where wheat cannot. We have evidence that barley was grown in this area. Rabbi Yishmael, a resident of the area, clearly feels it is a legitimate food. In letters discovered in Biblical Tel Arad, the writer mentions a shipment of barley from Anim, in today’s Yatir forest slightly north of Arad. And in this same Yatir forest in the Southern Hebron Hills, stands the Yatir fortress, from the time of Bar Kokhba (2nd century CE) Here archaeologists found residue of barley grains from that period. There were also agricultural installations found in the forest that look somewhat like olive presses but different. There is a suggestion that these installations were used to crush barley grains, which were harder than wheat and to make them into something edible. These installations are only found in frontier areas.

An important element of living on the frontier of the desert was security. Because the desert is a no man’s land where outlaws can run free, the frontier needed to be a barrier that protected the settled land. In times of strong leadership, the frontier would have fortresses or at least soldiers patrolling the area. In times of anarchy, bandits and wild animals could easily cross over and attack the farms and towns on the other side. King Herod, a powerful leader, made sure to build a line of fortresses on the frontier of the desert: Kypros, Herodion, Masada – as a security barrier.

The rabbis were aware of the dangers of living on the frontier. They instituted special laws for this area. For example, the Mishnah in Bava Kama 7:7 states that one is forbidden to allow a dog to run free since it can be dangerous. However, the Tosefta adds that in towns near the frontier, the dog must be tied up during the day but allowed to run free at night, as a deterrent to invaders. Similarly, Rabbi Shimon Ben Gamliel says that the obligation of a citizen to give money towards building a city wall only applies in a town near the frontier. Other cities presumably can get by without a wall. Finally the Mishnah in Sanhedrin 1:5 states that it is forbidden to destroy a city because of idolatry (an עיר נדחת) if that city is in the frontier because it will create a breach in security. 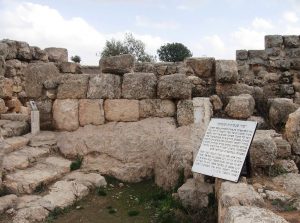 Did the residents of the frontier also make their matza from barley? Or did they expend extra money and effort to bring in some wheat from the west? Either way, their matza would be acceptable on Pesach.

Thanks to Dr. Doron Sar Avi who taught me all there is to know about the frontier.