One Nation Under God

Up until now most of the mishnayot of Masechet Betzah have been stated by the two oldest schools of the Tannaim, Bet Hillel and Bet Shammai. They reflect traditions that go back to the time when the Second Temple was still standing. In the two mishnayot on pages 21 and 22 of Betzah we start to hear a different voice from a new generation, Rabban Gamliel:

Rabban Gamliel was a scion of the house of Hillel and it is interesting that he chose to follow Bet Shammai in certain things. Who is he and what was his legacy?

One would be forgiven for getting confused about Rabban Gamliel. He is part of one of those dynasties where it seems that everyone has the same name: his grandfather was also Rabban Gamliel and both his father and his son had the name Shimon ben Gamliel. To differentiate the various Gamliels, the first one is known as Rabban Gamliel HaZaken, the elder. He was alive in late Second Temple times and we occasionally hear testimony from him. His grandson is known as Rabban Gamliel of Yavneh and he appears all over the Mishnah and the Gemara. He was one of the leaders in the post Temple, post sectarian period and he played a significant part in keeping the nation together, The Gamliels had an illustrious patriarch: Hillel, and a very important descendant: Rabbi Judah the Prince, known as Rebbe. So if you have to choose one rabbinic family to be familiar with, the Gamliel dynasty is a good bet.

While Rabban Yohanan ben Zakkai, a member of the same generation, saw his challenge as remembering the Temple while living in a post Temple world, Rabban Gamliel focused on the issue of unity. During late Second Temple times the Jewish people were terribly divided. There were religious divisions, both within Rabbinic Judaism and outside of it, with the various sects (Sadducees, Essenes, followers of Jesus and many others) interpreting the law in their own ways. Socio-economic chasms were great, and on the political level there were many differences regarding sovereignty and Roman rule. The Great Revolt was as much an internal breaking apart of the Jews as it was a battle against the Roman Empire. All our sources, from the Gemara and Midrash to Josephus, bear witness to this terrible internal hatred and schism in the Jewish nation. 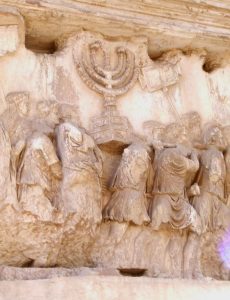 Image from the Arch of Titus (Wikipedia)

After the horrors of the Revolt and the destruction of the Temple, most sects largely disappeared except for the followers of the rabbis and those Jews who believed in Jesus as the Messiah. These two groups would eventually become Rabbinic Judaism and Christianity, respectively. Rabban Gamliel, in his role as Nasi of the Yavneh, post destruction Sanhedrin, saw his job as making sure there would never again be such a divide among the Jews. And so the major stories we have about him emphasize this point. In one famous case, he disagreed with Rabbi Yehoshua about the sighting of the new moon. Each believed that Yom Kippur should be on a different day. Rather than allowing Rabbi Yehoshua to follow his own ruling, Rabban Gamliel forced him to appear at his house on the day he, Rabbi Yehoshua, believed was Yom Kippur, carrying his staff and his purse. When Rabbi Yehoshua arrived:

“Rabban Gamliel stood up and kissed him on his head. He said to him: Come in peace, my teacher and my student. You are my teacher in wisdom, , and you are my student, as you accepted my statement,” (Mishnah Rosh HaShanah 2:9)

Having a different calendar is a major step towards sectarian division and Rabban Gamliel could not have that. In an even more dramatic story, the Sanhedrin placed Rabbi Eliezer Ben Hyrcanos into herem, excommunication, for not following majority rule. The sorrow of Rabbi Eliezer was so great that according to the Gemara nature itself mourned. There was a terrible storm at sea and Rabban Gamliel was on a ship. He called out to God:

“Rabban Gamliel stood on his feet and said: Master of the Universe, it is revealed and known before You that neither was it for my honor that I acted when ostracizing him, nor was it for the honor of the house of my father that I acted; rather, it was for Your honor, so that disputes will not proliferate in Israel. In response, the sea calmed from its raging.” (Bava Metzia 59b)

As part of his campaign for unity, Rabban Gamliel established that in most cases the halacha of Bet Hillel should be the one binding on all Jews. Even so, Rabban Gamliel and his family occasionally followed the stricter rules of Bet Shammai as we see in our Mishnah:

As other rabbis pointed out, these stringencies were usually only followed by the Nasi and his household and were not imposed on everyone.

As the Nasi, Rabban Gamliel also had to be involved in diplomacy with non- Jews, as well as to travel around to various Jewish communities. We hear about him on a trip to Rome with other scholars as well as in many places in the Land of Israel. The Nasi was often wealthy and it is clear that that is the case with Rabban Gamliel. He had to have a house where he could host rabbis, students and foreign visitors. Which brings us to the leniencies described in our daf:

“One may sweep the room of the couches. And one may place incense on a Festival. And one may prepare a whole kid goat, on the night of Passover,” (Betzah 22b)

The first two rules seem to clearly relate to Rabban Gamliel’s status. It would not be appropriate for the Nasi’s house to be filthy after a meal and so sweeping was permitted in the triclinium, the room where guests reclined on couches and ate. 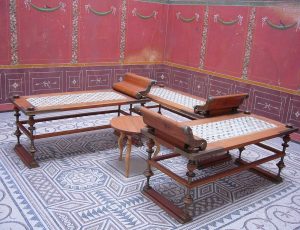 Reproduction of a triclinium (Wikipedia)

Similarly, burning incense to clear the air of unpleasant scents was something guests would expect in the house of such a prominent person. Rashi explains that burning  incense was forbidden on Yom Tov since it was not something needed by all people שווה לכל נפש, but an exception would seem necessary in the case of the Nasi. The third rule seems to be significant because we are in the Yavneh generation, right after the Temple was destroyed. Rabban Gamliel allowed preparing a goat as it would have been prepared in the Temple, perhaps as a zecher lamikdash, a memory of the Temple.

Rabban Gamliel’s legacy was one Torah for one people. He steered the Jewish people through one of the most difficult periods in its history. Today you can go pay tribute to him in the modern town of Yavneh, where his grave is said to be. 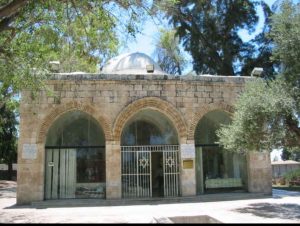 Significantly, he left us one more legacy – he insisted on a modest burial so that others who could not afford an elaborate coffin would not be embarrassed:

“Initially, the funeral expenditures for the deceased were more taxing for his relatives than his death, until it reached a point where people would abandon the deceased and flee. until Rabbi Gamliel came and conducted himself in a self-deprecatory manner, instructing the people that they were to take him for burial in plain linen garments. And all the people conducted themselves following his example, and instructed their families to take them for burial in plain linen garments.” (Ketubot 8b)